The 2018 World Cup is in full swing. For host country Russia, as well as for AGC Glass Europe, this represents a great achievement: 8 years of extensive preparations; 12 stadiums, of which 11 are glazed with AGC products; and various other facilities featuring AGC glass.

Any large-scale sporting event involves thousands of people and hundreds of major construction and manufacturing companies. As part of the World Cup preparations in Russia, AGC supplied glass for over 30 sites that were built or remodelled specifically for the event.  AGC supplied glass for the construction of 11 stadiums that will host the World Cup games. All these sites have been upgraded to comply with applicable standards and sporting event regulations introduced by FIFA. At the same time, the stadiums preserved their unique local character and atmosphere and the selected AGC glazing solutions helped in doing so.

Both the opening ceremony and the final game take place at the national Luzhniki Stadium in Moscow. For the event, the stadium was completely revamped using AGC’s energy saving glass Planibel Top N+T on Clearvision. Moreover, the site’s design is heavily accented by Planibel Clearvision , a highly transparent low-iron glass selected for its aesthetic qualities and deployed in the facades, interiors and VIP lounges. In total, AGC delivered 6,000 m2 of glass for the exterior facade and 2000 m2 for interior walls and lounges.

Over 100,000 m2 of AGC glass has been produced for other sites involved in this global event, including hotels, airports and other sports facilities across the country.* The glass solutions selected include solar control, energy saving, laminated and decorative glass products.

Four international airports and the main railway station in Nizhny Novgorod have also been upgraded with AGC glass: 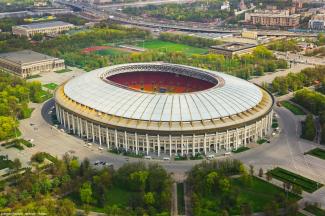 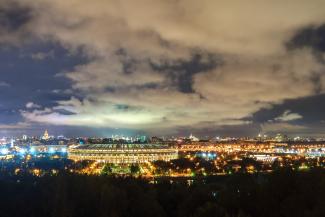 Based in Louvain-la-Neuve (Belgium), AGC Glass Europe produces, processes and markets flat glass for the construction industry (external glazing and interior decoration), car manufacture and other industrial sectors (transport, solar power and high-tech). It is the European branch of AGC, the world’s leading producer of flat glass. It has over 100 sites throughout Europe, from Spain to Russia, and employs around 16,000 employees.
More information on www.agc-glass.eu (corporate site), www.agc-yourglass.com (glass for the construction industry) and www.agc-automotive.com (for the automotive industry).